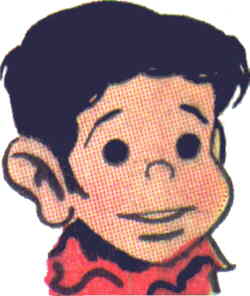 People of a certain age will recognize the face above as Dondi. I never followed the comic strip, in part because the New York Times was the paper of the house, but I think if I had I would have found it annoyingly cute, but after seeing the picture of little Aylan Kurdy lifeless on a beach a couple of weeks ago I've had a hard time getting Dondi out of my head.

Most of what I ever know about Dondi came from watching one of the movies made about him in the 1950s, an orphan with no one to tend him to GIs adopt him. According to Wikipedia, he was Italian, but in a sense he was the cute face of the hundreds of thousands of displaced people — after all the comic was inspired by a trip to Korea, where there were plenty of such similar kids walking around.  For their part, his benefactors,Ted Willis and Whitey McGowan, stood in for an America that recognized its good fortune and believed it had responsibility to help people in worse situations get on their feet, and if necessary give them a new home. As I think about America’s recent and uncharacteristically woeful record on taking in refugees I see is a loss of American values,

where greed and fear have replaced a basic principle of generosity.  Yes, lots have changed since the 1950s, but if we wish to have a future where the fear of terrorism does not cripple us, perhaps the answer is not worrying first and foremost about letting in terrorists, but rather showing the world our hearts and our readiness to help the less fortunate.  With that in mind, perhaps it is time for someone to revive the Dondi comic.
Posted by vhliv at 8:02 PM