Understanding the Real Revolution: Yulia Tymoshenko and the Future of Ukraine


People seem to breathing easier in Ukraine.  While in some places like the Crimea and Kharkiv there is still some resistance to the new order, even die-hard supporters of the regime are now reasserting their commitment to the territorial integrity of the country. Yet in the eyes of many protestors, this revolution is only partly done.  While the corrupt and murderous Yanukovych is gone, the entire political class that includes both the former supporters of Yanukovych in the Party of Regions and the opposition parties now need to come to terms with the fact that the people did not stage this revolution simply to replace one leader with another.  The past three months have been and, likely for quite a while yet, will continue to be about Ukrainians demanding that they be treated as citizens rather than subjects.

It was the centrality of this change that frustrated specialists as they followed the limited coverage of the events and in the Western media with its focus on dramatic moments that were, at least until the past few days, of limited relevance to the key developments of the protests.  Not that there weren’t images that did not reach the public consciousness.  The piano player on the Maidan did get noticed, but that only caught a glimpse of what was going on, which was the breaking down of a post-Soviet mindset and the forging of civil society.  In a certain respect this was also the rediscovery of ethical thinking and action, something that church leaders were quick to pick up on.  It is not that Ukrainians were not religious before, but the religion as it was practiced in most cases took a rather atomized form, a legacy of decades of repression.

Admittedly such things are hard to capture in a soundbite, or even through an anecdotal reportage, because the extent of the attitudinal changes is not easily measured by one event or an interview or two.  Pictures can do somewhat better.  The pictures of the masses of people who converged more than once to the Maidan caught the fact that people cared about how the government’s use of violence to suppress dissent, as did the pictures of the fighters on Hrushevsky Street, but even these did not to mind convey the connection between people that has been developing.  In that respect, the exception for me was a picture of people standing on the tracks in Dnipropetrovsk to prevent a train full of riot police and civilian thugs from moving.  It is all the more meaningful because support for the Maidan came slowly in Dnipropetrovsk, and was only galvanized after the riot police and thugs in civilian dress attacked protestors in January. 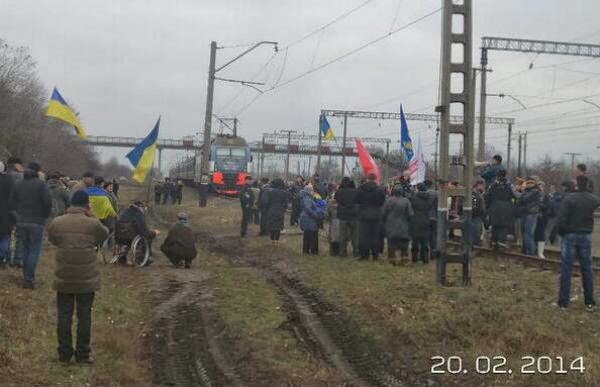 The best evidence of this revolution in how Ukrainians think about their relationship between themselves and their government has been the response to the release of Yulia Tymoshenko.  In the west Tymoshenko is known as the beautiful politician with the braids wrapped over the top of her head, who was the most visible force during the Orange Revolution almost ten years ago and since 2011 has been imprisoned following a conviction on corruption charges.  While there is no doubt this was a highly selective prosecution, Tymoshenko is no Aung San Suu Kyi, and is probably better compared to the late Benazir Bhutto, who was likewise a talented populist whose reputation is sullied by corruption. In Tymoshenko's case that includes her close association with Ukraine’s former prime minister Pavlo Lazarenko, and her accumulation of a vast fortune while heading a gas monopoly using the same combination of connections and lack of transparency used by other oligarchs.

Ironically, a decade ago that past and her populist skills made her an appealing political figure.  Then there was virtually no way to be politically consequential without being well connected to the business interests which had emerged as the old Soviet regime collapsed, and having been on the losing side of the battle between the so-called Dnipropetrovsk and the Donetsk clan, she not only had an axe to grind, but she had some ideas where the bodies lay, and understood the centrality to the secret deals in the gas industry to the rapid growth of oligarchs.  Put that together with an unmatched talent to speak to the people that was on display during the Orange Revolution, and her popularity was understandable.  What is more her 2009 deal with Russia, was actually transparent and helped expose the oligarch and Yanukovych backer Dmytryi Firtash as someone making money off the Ukrainian people.  Yet, the situation is different now, and were Ukrainians to see Tymoshenko as their political saviour they would be taking a huge step back, because were Tymoshenko to return, so too would the ugly pattern of politics driven solely by elite interests and kompromat, the compromising material that all the political elites had access to and used to protect their interests and reshape political alliances.  Further, Tymoshenko’s return would be the best way to confirm the Russian view that the past three months were all part of a plot orchestrated by the U.S. and the EU to replace Yanukovych with their own pawn.

Fortunately, the protestors of the Maidan saw this.  They recognized the symbolic relevance of Tymoshenko’s release, but that was it.  Crowds did not shout out calling for her to take the reigns of power.  Rather, very quickly the talk was that people had not given their lives to install Yulia as president, and the clever poster-makers who have been an important part of the revolution were quick to make their contribution to spreading that word. 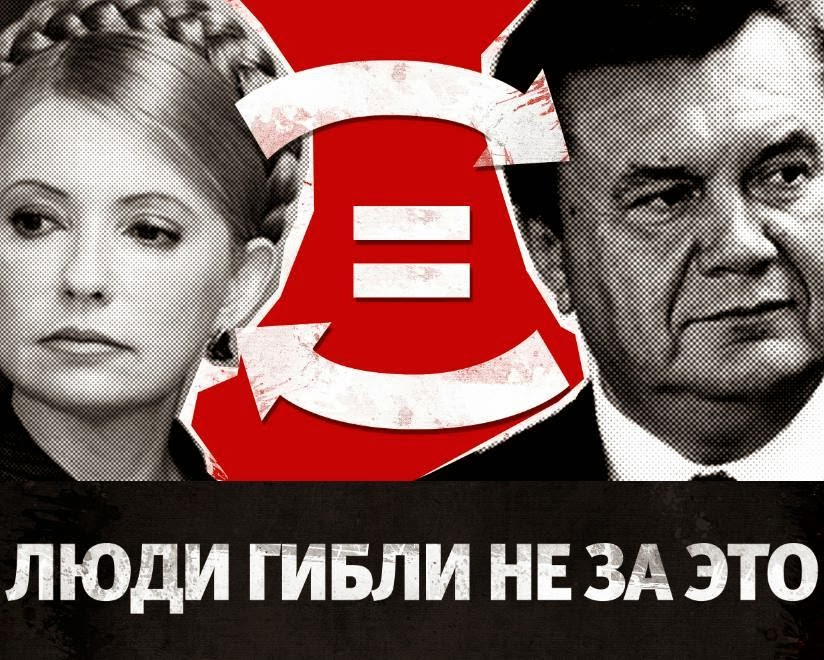 Caption:  People did not die for this. 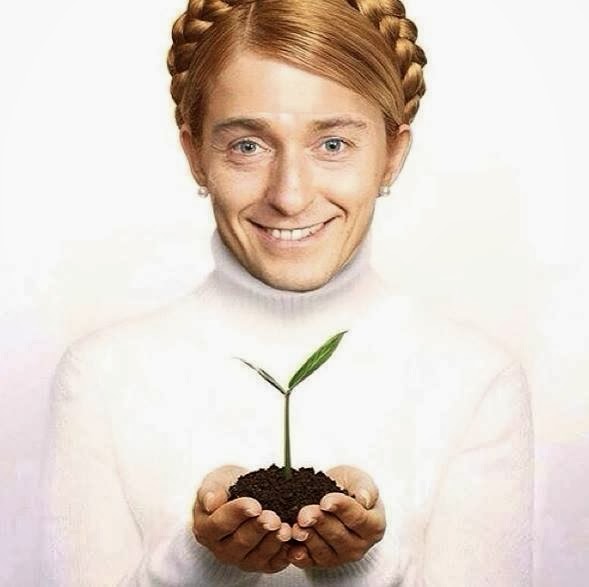 This skepticism, and its breadth among Ukrainians is true sign of the changes that have happened in Ukraine, and now after three months of persistently running behind the protestors at the Maidan, it is time for the established politicians do their part and recognize that they are no longer administrators of elite expectations they are observers of the people.
Posted by vhliv at 10:24 AM