The Revolution Reaches the Next Stage

Four days ago, it looked like it was just a matter of time before Yanukovych had crushed the fighting on Hrushevskyi Street. The Internal Force troops (something equivalent to our national guard) would then move on and clear protests at the Maidan a few blocks away using the actions of those on Hrushevsky Street to justify any violence, even though the protests at the maidan had remained resolutely committed to non-violence.  That in turn would usher in a new phase of civil disobediance that would bring people out on the street in a week or two.  That of course did not happen.  The revolution proceeded to a new stage but because the fighting on Hrushevsky street carried on, giving the first indication of the soft support for Yanukovych among the Internal Forces.  One only had to consider that if those troops were unwilling to use deadly force against people attacking them, they were even less likely to fire on the unarmed and peaceful protestors at the Maidan to realize how weak Yanukovych’s hand had become.

That put Yanukovych in a bad position, that only looked worse the longer he was unable to bring things under control.  When 2 people were killed on Wednesday, the first time Ukrainian forces have ever killed Ukrainian protests he had to do something, and by the end of the day a truce had been called with talks between the government and the three parliamentary opposition for Thursday 24 January.  This proved to be a typical Yanukovych trick, however, as he offered no serious concessions, and instead seemed to be playing for time.  Parliament would be reconvened, but not until 28 January, and those arrested would be released if the the protestors abandoned their positions on Hrushevsky Street.  The opposition leaders dutifully brought that news back to the Maidan, and again disappointed by not immediately condemning these offers as unacceptable.  The Maidan rejected the offer, and extended its occupation to a couple more blocks of the government district in Kyiv.

Meanwhile, people outside the capital, have seized the initiative.  Predictably mass takeovers of regional governments started in the West where several regions are under complete control of the opposition forces, but as it has become clear just how weak Yanukovych is that kind of rebellion is spreading fast.  The story is not over, and sadly that weakness has led his loyalists to increase disappearances and other shameful acts, but this does not look like a civil war, it looks like what we supporters had always hoped, the removal of a criminal regime that was willing to sell out the country for the price of some deaths and loan guarantees that would allow Yanukovych to continue to enrich himself.

See the map below as of the evening of 24 January. 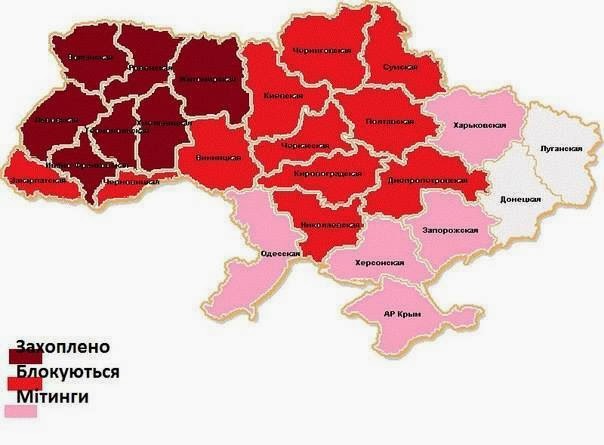